5 Costly Endorsement Marketing Mistakes and Tips for Avoiding Them

Mistakes are a great opportunity to learn from. In fact, the only real mistake is not learning from a mistake at all. With that in mind, here are some common endorsement marketing mistakes brands make and some tips for avoiding these embarrassing moments.

An athlete’s character is often overlooked in favor of their on-field performance. A risk like this can often times lead to detrimental repercussions.

For example, while few people doubted Aaron Hernandez’s abilities on the football field, many pre-draft NFL reports questioned his “moral character.” However, that did not stop the New England Patriots from drafting the John Mackey Award winner and future Pro-Bowler. Nor did it stop CytoSport (makers of Muscle Milk) or Puma from signing him to big-time endorsement deals, only to later drop those deals after Hernandez was charged with first-degree murder.

Due diligence into an athlete’s moral character can help your brand find an athlete with a positive character; not to mention save headaches, shame and negative brand association from off-field scandals.

Timing of events is another challenge for many brands. Take double-amputee Olympic superstar, Oscar Pistorius, for example. Shortly after capturing the spotlight at the Olympics for competing in the able-bodied games by running on carbon-fiber blades, Pistorius was featured in multiple advertisements for Nike, one with the slogan “I am the bullet in the chamber.” However, given his recent premeditated murder charge, this endorsement seems poorly and unfortunately timed.

Or, how about Michael Vick who plead guilty to federal dogfighting charges. He was sentenced to prison and dropped from his Nike contract only a few weeks prior to the start of the 2007 NFL season.

Although it is difficult to predict a poorly timed endorsement, there are still precautions brands can take in order to prevent them. Again, researching an athlete’s character can pay dividends.

Furthermore, paying athletes in company stock rather than cash can help serve as a deterrent by reminding the athlete that if they engage in negative behavior, which decreases the value of the company, it will also hurt the athlete’s own pocket book. 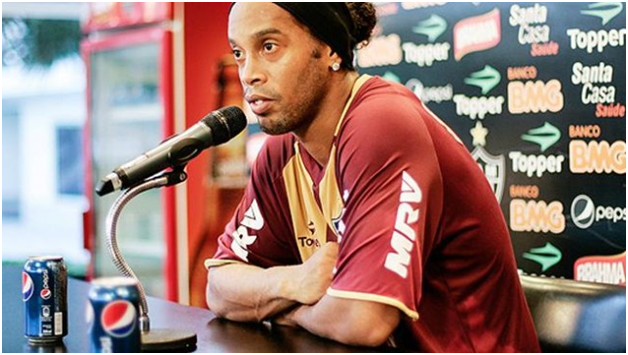 Ronaldinho was dropped from his Coca-Cola contract after appearing with Pepsi cans during a press conference. The mistake cost the star soccer player £1 million in unpaid earnings as his £500,000 per-year contract was set to run until 2014. After the slip up Coca-Cola’s marketing chief, Marcelo Pontes, called the ordeal, “Embarrassing!”

Such was the case when Nokia used a handful of athletes to send out a generic mass Tweet promoting their ESPY’s after party. An unauthentic, pre-packaged Tweet can cause consumers to question the validity of your brand.

Sending out a generic mass Tweet is not an effective marketing strategy. Instead, a more effective social media strategy is to use personal and authentic messages.

Try giving guidelines to each member of your endorsement team. Then, based off those guidelines, allow each member to craft their own genuine and personal messages, which can still be approved by your brand.

Another mistake brands make is employing an endorser who is not a good fit with the brand. A common misfit between a brand and an athlete occurs when the athlete portrays a unfavorable public image, which a brand does not want to be synonymous with.

For example, Michael Phelps was not resigned to his Kellogg’s endorsement after photos emerged of him apparently smoking marijuana. Kellogg’s spokeswoman Susanne Norwitz issued a statement saying: “Michael’s most recent behavior is not consistent with the image of Kellogg’s. His contract expires at the end of February and we have made a decision not to extend his contract.”

What about Lance Armstrong who was stripped of seven Tour de France titles and countless accolades after admitting to doping? Behavior like that derailed his Nike campaign and the company was forced to release the statement, “Nike does not condone the use of illegal performance enhancing drugs in any manner” to make it clear to the public Nike is in no way tied to Armstrong’s illegal actions.

5. Failing to “Live” the Brand

Another mistake can stem from endorsers who do not actually use the brand they endorse or believe in the products they are endorsing. Such was the case when soccer star Ronaldinho was dropped from his Coca-Cola deal because he was seen at a press conference with a can of Pepsi in front of him.

On the flip side, the best endorsers are the ones who actually use the products they endorse. They “buy into” the brand and they are said to “live” the brand.

Take Cam Newton and Under Armour for example. Entering his NFL rookie season, Newton had offers from seemingly every major athletic company vying for his endorsement, including heavyweights Nike and Reebok. However, Newton chose to sign with Under Armour; opting to stay with the same brand he wore while winning a National Championship and Heisman Trophy at Auburn University. Why did he choose to stay with Under Armour? Newton said he likes the direction the company is taking. Further stating, “Ya’ll have seen just the appetizer of where this company is going to go.”

In addition, in reference to his custom shoe design with Under Armour, Newton said “The whole process of making the shoe, I lived it first hand.”

Here are Some Tips to Remember When Using an Athlete to Leverage Your Brand:

Now is a great time to sign up with opendorse and put your newfound knowledge into action by avoiding these common mistakes and creating a winning athlete endorsement campaign.

YouTube Lessons from a D1 Lacrosse Player: How Mitchell Pehlke Builds his Brand

Mitchell Pehlke understands the value of social media and is making the most of playing at a Division 1 level. The Ohio State Lacrosse Sophomore