Hockey fans are some of the most passionate in the game when it comes to rooting for their favorite teams and players. In return, NHL players have some of the highest engagement rates amongst sports fans and offer brands a great way to zero in on target markets.

With that in mind we present you the top 10 NHL player endorsers: Nash is a five-time NHL All-Star and he also won the NHL Player Foundation Award in 2009 for his volunteer work throughout the Ohio community. He won a gold medal at the 2010 Winter Olympics with Team Canada and rejoins the squad in Sochi in hopes of a repeat. Nash has an endorsement deal with Under Armour.

Staal was the second overall pick in the 2003 NHL draft by the Carolina Hurricanes. In 2006, he led the Hurricanes in playoff points en route to winning the Stanley Cup that year. Staal has an endorsement deal with Bauer, which also includes his brothers Marc, who plays for the New York Rangers, and Jordan, a fellow Hurricane teammate. Eric also has a deal with General Mills. 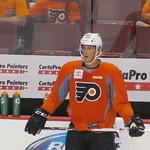 It’s pretty easy to see why hockey fans root for Lecavalier. The Tampa Bay Lightning selected him with the number one overall pick in 1998 and in 2004 Lecavalier helped lead the Lightning to their only Stanley Cup victory. Add on the fact that Lecavalier’s foundation donated $3 million toward the construction of the Vincent Lecavalier Pediatric Cancer and Blood Disorders Center at the newly built All Children’s Hospital in St. Petersburg, Florida and it becomes clear why hockey fans have so much love for Lecavalier. Now playing for the Flyers, the Canadian star has an endorsement deal with Liquid Nutrition.

Malkin already has a Stanley Cup, Conn Smythe Trophy and two Art Ross Trophies. The Russian superstar is a member of the 2014 Samsung GALAXY Team assembled for the 2014 Winter Olympics in Sochi. “Geno” also has an endorsement deal with Bauer.

After becoming a free agent in 2011, Richards opted to continue his playing career in New York. The decision paid off by leading to an endorsement with UNTUCKit shirts. “We are extremely excited about this partnership,” UNTUCKit CEO Chris Riccobono said. “I’ve always been a huge sports fan, and as a New Yorker, I’m a big Rangers and Richards fan. Brad is known for his sense of style. The fact that he is also a fellow wine connoisseur makes him the perfect ambassador for UNTUCKit.” Richards also has endorsements with Under Armour, Chase Bank and Muscletech, a sports supplement brand.

In 2012, Parise signed a 13-year deal with the Minnesota Wild, returning him to his hometown of Minneapolis. Parise was the captain of Team USA at this year’s Winter Olympics. In regards to his endorsement deal with Easton, Chris Zimmerman, president of Easton Sports said, “He’s quickly made a name for himself as the premier American player in the game and a proven winner.”

At age 25, Towes already has two Stanely Cups, two Olympic gold medals and a Conn Smythe Trophy. This year, he and his Blackhawks teammates look to defend their Stanley Cup championship from last season. Towes has endorsements with Bauer, Canadian Tire, Chevrolet and Lemonhead.

Stamkos led the NHL in scoring in 2010 and 2012. An injury will kept him out of the Olympics this year, but at only 24 years of age this fast rising superstar will have plenty of more Olympic opportunities. Stamkos has endorsements with Nike, Bauer, Coca-Cola and Tissot watches.

Ovechkin is one of the best players in the game as evidenced by his three NHL MVP awards. The Russian is an official ambassador for this year’s Olympics being played in his home country. He has endorsements with Nike, Bauer, Gatorade and Kraft. Coca-Cola and Gillette featured him in Olympic ads as well.

“Sid the Kid” is the face of the NHL and the most marketable player in the league. His endorsement with Reebok is the largest endorsement deal for any hockey player. Crosby also has endorsements with Gatorade, Bell, Sport Chek, Frameworth and Tim Horton’s. If he can somehow top this performance, more deals may come his way.

Create Your Own Endorsement

Did we miss anyone? Let us know in the comments below.

Are you ready to create an athlete endorsement featuring a hockey star or maybe an athlete from any other sport?

Excellent! We can help. Head over to opendorse and sign up (for free) so you can put the power of an athlete endorsement to work for your business today!

Building Brands and Engaging Fans: How Nebraska is Helping Student-Athletes Prepare for their Future